Ultimate Monster Truck: 3D stunt racing simulator offers you multiple types of crazy and 3D Monster Trucks in these driving games that are known as impossible monster truck stunts and realistic driving simulation. There are two modes in these realistic simulation games like Free Mode and Career Mode. Free Mode is given you to drive freely on crazy tracks and also for practice on these impossible and Challenging tracks. Career Mode has unique 25 tracks and 45 impossible challenging levels which gives you more fun and challenging tasks and also makes you the best Monster Truck Driver.

After selecting Career mode and getting ready to drive monster trucks for exciting rides and crazy stunts you have to complete challenging tracks of levels. You will drive your Monster Truck on big ramp tracks that are in the middle of the sky. These crazy impossible monster games will give you sky high entertainment and give you a chance to drive on curvy and difficult tracks in a high sky 3D environment.

In the past, you played many different monster truck games but the Ultimate Monster Truck: 3D stunt racing simulator is the best 3D Monster Truck game. In these games, the best feature is given for you to survive again if you fail in the current level after collecting some checkpoints which are coming on your way and also you have collected it to survive when you have fallen from the curvy tracks. Ultimate Monster Truck: 3D stunt racing simulator is a golden chance to drive real monster trucks on big height ramp impossible tracks. 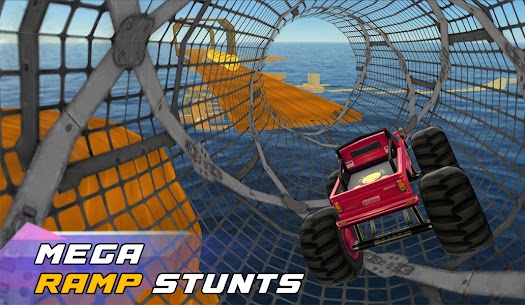