But it is easier said than done. You collect souls and summon a tower, but which tower to be summoned would be randomly decided. You need to overcome the randomness and execute the best possible and most optimal strategy with your towers and circumstance in order to defeat the friend and win the battle!

About 50 kinds of towers exist in the game, each of which has different stats and characteristics. Some towers are of a dealer type with high damages, and other towers belong to a debuff type that can cast poisons or frozen over monsters. There are even towers of a support type that can make other towers stronger by giving buff or boost their growth! Some special abilities will be activated only if a certain condition is fulfilled, and you need to combine the characteristics together to devise the best deck and strategy.

King tower is located at the end of the passageway, and it leads the battle with its own unique skill. Iron king-tower can raise the attack power of all towers on the field, and Ice king-tower casts frozen curses on monsters. Soul king-tower, last but not least, facilitates the acquisition of souls and speeds up your game-play strategy. Infinitely various strategies would be available by combining the deck of towers with the unique skills of the king towers.

Nothing is certain, especially on the battle field, even if you own the best and the most glorious deck of towers. It is up to you how to deploy and operate the towers randomly summoned on the field. You can use them to strike enemies with strong damages, or you can sacrifice them for the growth of other towers. You don't have much time as the enemies are approaching fast. You need to make a decision every second!

■ Win the Battles, and Rise Up to High Ranks

The glorious victory depends on how you organize and strategize your towers. It is only you who deserve the best! You can earn rewards from game plays, collect various towers, and refine the strategy to deploy the towers most efficiently in the continuously evolving circumstances. Immerse yourself in the play, and soon you will find yourself placed at a high rank and receiving the respects and the admirations from other people!

Now it is time to engage in a battle. Wish you glory and good luck! ? 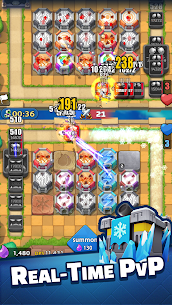