To win, be the first to get 31 points with just three playing cards. The player with the least points loses a life. Just press a button to shuffle the playing cards again. Whether you're looking for multiplayer games or single to four player games – here's where all the awesome fun happens.

Features of the Online Game:

Thirty-One is a free Online Card Game.
Improve your skills offline or online in the multiplayer mode. Play in public with players around the world or privately in separate multiplayer online rooms. Get to know new people using the In-App Chat.

Easy to learn and fast to play
Quick to learn & easy game rules – but still strategic.
Short playing time: Each online multiplayer card game can be played quickly – perfect for killing time on the go

Authentic and customziable design
Authentic design: Play like in a real pub – one of the best four player games ever! Choose the card sheet as you like. (French Scat sheet or Double German)

Play on your phone or tablet
The Card Game works without any issues on your smartphone and tablet.

Rules for the Classic Card Game – Two or Four Player Games with Thirty-One:
The classic card game can be enjoyed as a two player or four player game. It has 32 playing cards. While playing multiplayer online card games, you have a hand of three cards and up to three lives represented by matchsticks. Three more cards are placed face-up in the center. Whoever first reaches 31 points wins the round. If no one does, the player with the lowest point score loses a life.

Once all your matchsticks are gone, you can “swim” – you can continue to play. If you lose one more round, you “drown” and lose the free card game. But you still have a chance of winning even while swimming because whoever remains in the end wins.

In multiplayer online card games, you get points for playing cards of the same suit: Rank cards are worth the same as their number (7, 8, 9, 10). Face cards are worth 10 points and aces are worth 11. Another special card combination has three cards of equal point value – those make up 30½ points.

You can make one of four moves in each round of an online multiplayer card game:
♠ Exchange one of your playing cards with one from the center
♥ Swap your entire hand with the three cards in the center
♣ While playing online card games with friends, you can pass if you don't want to make any card changes
♦ Knock to indicate the last round once you think that you will not be the player with the lowest hand-score.

Start playing today
Thirty-One is among the trending games for those who enjoy playing free card games, drinking games or party games. It's one of the best games like e.g. Solitaire, Skip-Bo, Pinocle/Pinochle, Canasta, Uno, Rummy 500, Bridge, Tonk and Crazy 8. There's no better way to enjoy free card games with friends on your smartphone or tablet – anywhere, any time! 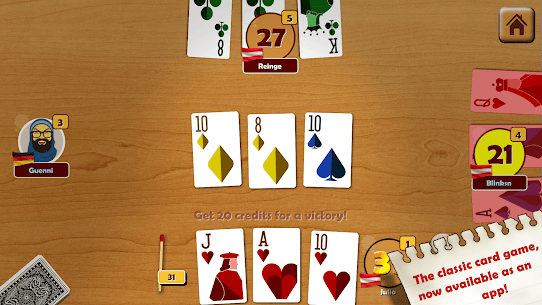