Passionate about shooting games? Want to challenge your sniper skills? Then take a look at Tank Sniper — an action shooter game where you should test yourself as a sniper tankman.

Is your tank gun ready, soldier? Then hide… seek for targets… and destroy them all! It's time to show everyone who's the most skilled sniper here!

Tank Sniper is an exciting 3D shooter with modern graphics and multiple levels of varying difficulty. Try yourself as a real sniper — accurately shoot from a cover to hit enemy targets.

Take on the role of a brave tankman. You have only one tank — keep it safe! Aim and shoot like a true sniper to win an unequal fight. Unleash the full potential of this armored machine: sight accuracy, fire range, and power of the gun. Remember that you have a limited number of shells — use them wisely.

You'll start the war battle in the ambush, where you'll be completely unnoticeable, so the first shot will be unexpected for the enemy. After that all, opponent weapons will be aimed at you: snipers will immediately stick their shotgun out of the house window to start shooting, passing tanks will turn the muzzle of their guns to you and fire a powerful shell, and military helicopters and drones will strike from the air. Hit as many moving targets as possible before you're spotted.

Explore the area to plan and carry out your blitz attack properly: accurate shooting at fuel barrels can blow up tanks and opponent vehicles in one fell swoop, and a shell correctly aimed at the building may completely destroy it, eliminating at the same time a few enemy snipers lurking inside.

Complete levels and improve your tank to be more confident in combat: enlarge the number of your guns, increase impact damage, add more shells, adjust the sight more accurately, and make your armor stronger. Upgrade your tank and fight back against your opponents! Tank Sniper shooter has intuitive controls, so you can play this action shooting game with just one finger. Short dynamic battles and gradual increase in military forces will keep you in suspense throughout the game. Realistic sounds of gunfire, cannon blasts, exploding bombs, and whistling rockets — all this, together with the colorful memorable graphics, will help you completely immerse into this tank game in a matter of seconds. Scenic locations such as forests, blazing sunsets, and snow-capped mountains will delight you with their diversity. You won't get bored!

Now you know the battle rules. Ready? Then go ahead!

Now there are more enemies and more destruction. With new graphics and optimization. 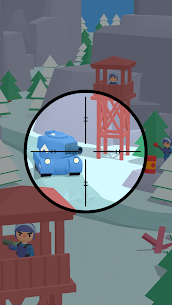