The Logic Wiz Sudoku was chosen as the Best Sudoku App and the Best Brain Training App. The Logic-Wiz Sudoku game comes in a Classic Sudoku format as well as 18 Sudoku variants. Each variant is entertaining and challenging. The Variants are divided into 8 Zones. Each zone has core Variants, some of which appear in all the boards( puzzles) of the Zone. Each Zone has 5 levels of difficulty: Beginner, Easy, Medium, Hard, and Expert.
Logic-Wiz frequently adds new Boards, Variants and Zones.
If you are looking for a free fun logic game and/or brain training game this is the place for you.

Hello Sudoku lovers, a new release with an exciting new variant and various enhancements. We hope you like this release.

In This Release:
- New Premium Variant: Slingshot, core variant in Wild West.
- Addition to the Killer variant: Cages with no sum, the only killer rule that applies to these cages is that digits cannot repeat in a cage.
- New puzzles in all zones and levels.
- Additional various enhancements and bug fixes. 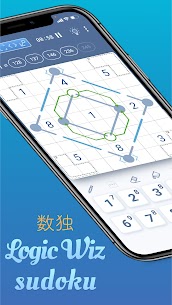