Welcome to this fantastic hyper-casual squid game called' the squid game 3d '. Squid game is a 3d survival royale game based on action & adventure. In this game, we battle against your other players to win huge prize money!

1. Best tip about the squid game 3d 2021 is not to panic. Always use your mind and find a solution when a squid games 3d (squad game 3d) player gets panic-made mistakes which can lead him to elimination or death.
2. Always be careful and watch your steps.
3. Don't trust anyone and be confident.
4. Always listen to the instructions carefully.

A hyper-casual 3d game. It is a fan base game inspired by the squid game series. All characters are 3d. A fantastic 3d game experience. 3d games are more visually better than 2d games. So, we are coming up with a squid game 3d all games.

Red light, green light is the first game of squid game 3d games in which a player must stop on the red light and run at green light under the given time. He must cross the finish line. Otherwise, the player will be eliminated if he is caught by moving while red guards will kill the red light, and the doll notice the player.

The second squid game 3d challenge is in which a player must cut stamped shapes out of a honeycomb candy at a given time. That is also called ppopgi and dalgona. If the shape is not cut perfectly, the player will be fired by red guards.

On the third number of squid game 3d games, we have a tug of war, also known as rope pulling. Two teams are pulling each other to the hole to eliminate each other.

In squid game 3d all games, two players team is made, and each player has ten marbles to survive; one of them must have 20 marbles without making violence under a given time; otherwise, you will be getting eliminated or fired by the red guard.

In the 5th game, players have to hop across a suspended bridge lined with glass panels, some of it is regular glass, and some of it tempered or made stronger glass.
If one of the squid game 3d all game players chose a regular pane, it would break, and they would fall and be eliminated. Just take care while hoping to the glass.

Two teams go up against one another, a defender and an attacker. A player from the offensive team must reach the squid's head at the top and touch it with their foot, but the defensive team will stop it.

Currently, we developed the four games red light, green light, honeycomb, tug of war and marbles. The rest of the other games are coming soon. Just download squid game 3d 2021 to enjoy the experience of squid game survival games.

* Disclaimer *
All logos/images/names are copyrighted by their prospective owners.
Any prospective owners do not endorse this image, and the images are used simply for aesthetic purposes. This application is an unofficial fan-based application.
No copyright infringement is intended, and any request to remove one of the images/logos/names will be honoured.
Squid game fans make this app, and it is unofficial. The content in this app is not affiliated with, endorsed, sponsored, or specifically approved by any company. All copyright and trademarks are owned by their respective owners. Please let us know, and will remove it as soon as possible. 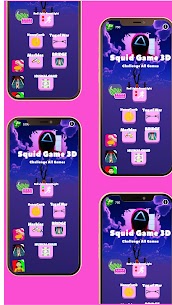