In the first chapter, you get into an accident and have to get out of the forest horror 3d with Siren head! On the way to back, you will get in the way of the Siren Head game horror forest 3d! Survive and collect parts for your car and fix it! Can you do it?

• Scary and unique character – Siren Head: his 3d model is made very high quality and frightening.
• In survival horror game 3d in the forest about siren head and noises of a siren head game 3d, a interesting story about the survival of a simple working person: help him survive and defeat the Siren head.
• The constant feeling that the Siren Head is following you: tip – constantly turn around and watch if he is following you! This will tell you your pulse. Tip: listen to the scary sounds of the siren head game 3d!
• This is a survival horror game 3d in the forest about Siren Head where there is a hardcore final battle: at the end you will find out if you were able to defeat him.
• Equip and survive for the fight: take everything you need to fight him. The game will show you who Siren head is!
• In survival horror game 3d in the forest "Siren Horror Game: 3d survival" – Truly atmospheric and horror locations 3d: visit the forest, the city, the village, the parking lot, the labyrinth!
• Mini horror games and DLC with friends: simple mini games have been prepared for you, where you will find monsters, including the Siren Head horror game 3d!
• Atmospheric graphics and scary sounds of Siren Head: post-processing, scary noises and good level design are made for you!

Denial of responsibility:
This is a survival horror game 3d in the forest about Siren Head – an unofficial fan-made horror game mod with a "siren head", I have nothing to do with game developers.
Siren Head – a character created by Trevor Henderson
All copyrighted materials are the property of their respective owners. The use of this app is subject to fair use guidelines. If you believe there is a direct copyright or trademark infringement that does not comply with the Fair Use Guidelines, please contact me directly via email and I will resolve the issue immediately.

1. Fixed crashes
2. Changed the complexity of the location "Maze"
3. Working with the cast scene
4. Fixed a bug with the choice of weapons
5. Location change #5 (added a cage and changed the mechanics of spawning enemies) 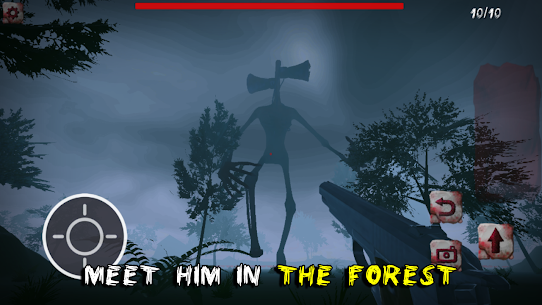