Plot description: For the sin of disobeying God's "arrogance", the Archangel Lucifer was cast into hell and became a "fallen angel". Not only that, but in the lowest level of hell, the "Palace of Demons", the demon kings who ruled hell sealed Lucifer's power. Although Lucifer lost everything, she led Leviathan, the jealous demon king who admired her, and the high school girl Tenbu Maria who met on the ground, turned into "Lucifer the Pride Demon King" and launched a counterattack against the Seven Demon Kings. journey of. The book of apocalypse surrounding the "Seven Deadly Sins" brought by the glamorous Demon Kings and the others kicked off.

In addition to the main storyline in the animation, the game has specially added many unique original magic stars and succubus characters, and invited a number of well-known painters on Pixiv and Twitter in Japan to set up and create characters.
Added richer and more interesting content to the original world of the seven deadly sins.

All characters can freely configure your favorite Kanban girl, allowing you to enjoy browsing from various angles.
The battle screen uses the Unity 3D animation special effects carefully created by the team, which fully expresses the vigor and refreshing feeling of the battle animation.

[The original voice of the animated voice actor is presented, my ears are numb and can't stand it]

[Attribute restraint and character training]
The combat system classifies characters into three major attributes: "force", "skill" and "speed", each with their own characteristics and restraining each other (force>skill>speed>force).
There are also various states and auxiliary skills, which make the battle a variety of challenges. Players need to think about the team composition and skill combination to overcome various difficulties.
Abundant development lines and star stone equipment system, you can cultivate and strengthen your favorite characters from various directions.

With animated characters as the basic members, dozens of original characters have been added with their own characteristics, allowing players to enjoy richer fun in the world view of the Seven Deadly Sins.
When the characters of the plot dialogue, there will be a choice of limbs. If you choose different dialogues, you will see different answers given to the player according to the character's character settings, and affect the other party's favorability. If you increase favorability for your favorite characters, there may be interesting things. Interactive yo. 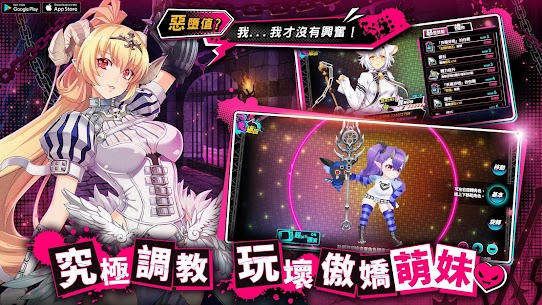