Get ready to jump into action and show your rivals who’s the real boss in fast real-time PvP TD multiplayer battles.

Start battling against players around the world in an action-packed tower defense game, where the last player standing wins. It’s a battle royale!

– Become a master of strategy and deck building. Luck favors the bold.
– Outsmart your opponent with powerful heroes and spectacular spells.
– Collect and upgrade dozens of unique heroes.
– Win battles and progress to new Arenas to unlock epic new units and heroes.
– Battle your way to the top against the best rivals in the world and get amazing rewards.
– Survive against waves of enemies in PvP and co-op modes.

Please Note: this Rumble Rivals tower defense strategy game is a free to play game that includes optional in-app purchases. You can turn off the payment feature by disabling in-app purchases in your device’s settings. 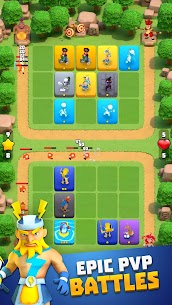