⚓️ Ahoy me hearties! Ready to hoist the mainsail, batten down the hatches and blaze your way across the Caribbean in search of plunder, glory, and hours of ?‍☠️ pirate fun? Down your grog and grab your cutlass ⚔️, it’s all hands on deck in this fast-paced pirate simulator that will really float your boat. Race full-sail across the high seas to do battle with simple merchantmen, naval battleships ?, and fearsome sea monsters, all while filling your coffers with booty to spend on expanding your tropical island hideaway and upgrading your mighty pirateship in preparation for ever fiercer battles and more dastardly buccaneering further into the game! ?

?‍☠️ A pirate’s work is never done! The action comes thick and fast in the turbulent waters of this fun fighting game, and prize ships laden with plunder can be spotted on the horizon at every moment. Engage them in battle, exchange broadsides, send them down to Davy Jones’s locker, and grab their lovely loot ?. But keep an eye on the enemy’s level and the number of warships you engage simultaneously, or it may be you who’s heading for a watery grave.

?‍☠️ Splice the mainbrace! Head back to harbor to trade your barrels of booty for coin at the local pirates’ market, then celebrate your victory and enhance your fearsome reputation by upgrading five different parameters of your pirateship or improving your lighthouse to open up new expanses of the high seas to your reign of piratical jo. ?.

?‍☠️ Pieces of eight! What do pirates love even more than the taste of rum, the scent of the ocean, and a fair following wind? Why, sunken treasure ?, of course! Scour the Caribbean seas for wrecked ships and bring home even more loot to help you progress through the game ? ?.

?‍☠️ The kraken ? awakes! Maybe it’s the clement climate or the constant supply of drowning sailors, but the particular corner of the ocean where this game is set is suffering a peculiar infestation of gargantuan sea monsters that pose a threat to every boat on the water. Train your cannon ? on them and rid the oceans of this cursed blight – profiting mightily in the process, of course!

?‍☠️ Not all hope is lost! You may be the most dastardly of pirates with an insatiable thirst for gold, but you get to show your better nature elsewhere in this battleships game – in side missions where you rescue maidens in distress and other unfortunate victims of life’s vicissitudes. But fret ye not, the rewards for your good deeds are ample too!

? SCOURGE OF THE SEVEN SEAS ?

Does the free, lawless, action-packed life of a pirate appeal? Want a reputation for terror and plunder that would put Blackbeard to shame? Raise your jolly roger, launch your ship and download Pirate Raid, the casual pirate simulator that’s fast, fun and full to the gunnels with nautical adventure and buccaneering derring-do! 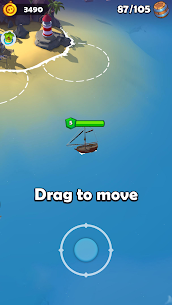