Tired of playing as boring heroes? Become their enemy – the evil and mighty Dungeon Lord! Lead the Legions of Darkness, assemble a mighty army of monsters, ravage enemy lands and protect your domain… Conquer the world in a grandiose battle royale!

Your task in this tower defense game is simple – destroy enemy castles and protect your own! Unlike many other classics, you have not some towers at your disposal — but cards that summon mages, minotaurs, ghosts and even succubi! Be wary – your opponents are prepared for horde defense, and rush tactics may not always work… Come up with a cunning plan and don’t forget about your own PvP defense!

Conquer, destroy, enjoy, clash! This dynamic real time PvP won't disappoint you! Can you predict enemy's moves and come up with a winning tactic in this tower defense? Rush games are fast and furious! Go from defense to attack and crush the enemy!

Each battle is fun and unique, and the game itself is easy to learn, but exciting to master! A detailed tutorial will make sure you realize the basics, and then it’s a matter of experience! Quite literally – the higher you cards’s level is, the more health your castle has! Level up, conquer and expand!

TD games are always more fun with real players, and you won’t be disappointed by PvP in this tower defense! Become a top ranking player and reap the glory and rewards! But there’s more to do – quests and Co-Op battles are there for those who want something different!

Published under the global gaming brand MY.GAMES, the leading developer and operator of unforgettable gaming experiences on PC, mobile, and consoles.

The update is here! What's new:
- The new Adventure mode has replaced the 2x2 mode. Complete a sequence of boss battles to earn valuable rewards!
- Season Leaderboard. Earn rating points and get prizes at the end of the season
- New currency that doubles your Battle Pass points
- Avatars and frames for your profile
- New emoji
- Cross-platform authorization
- Support of new languages
- Lots of other new features and improvements! 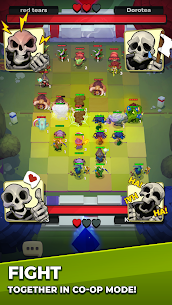