Can you think fast enough to merge and combine all the dragons and fight against the enemies?

Your quest is simple…use your strategy to combine the dragons, warriors and archers on your battlefield and fight against the enemies! You must fuse your troops into a giant monster quickly if you want to win in one of coolest dragon games!

Merge Dragons: Merge Battle is a cool real-time strategy game for everyone that want to merge monsters, join and clash dragons & dinosaurs and win the fight.
The main goal of the game is to beat all the enemies by combining your warriors or dinosaurs. The enemies are dragons, monsters, or other dragons, so it will not be easy.
Attack to take control of the enemy locations.
React and think quickly. Use your strategy and tactics to win the battle and move to the next level.

Fight the final boss after merging all your creatures! In every step of this challenge, a monster with increasing power will wait for you! Apply your strategy in real-time, and spot the right combination to draw.
What will be the next right move?

Merge monsters and unlock new and more powerful dragons!
Only 1% of players unlock all the creatures and win the challenge ⏩ Are you up for it?

Grow your warriors and dragons from simple soldiers and drakes to terrific monsters when you merge and fight them. Use your finger to draw the right combination and evolve your monsters.

Remember, if you don't merge monsters fast enough, your enemies will beat you in the final round fight. Are you ready to join and clash in this drawing challenge?

Play for free. Challenge yourself to become the king of merging wars…
This is not one of those classic and boring merging games. This is a new, free, and cool game for all boys and girls that are dinosaur games fans.

List of the features of your new free casual game:
? Beautiful 3D graphics
? Become the strongest and most strategic dragon
? 100% free game
? Fun and addictive gameplay
? Easy controls
? For kids and adults
? Game for girls and boys
? Many monsters, warriors, and dragons to merge, join and clash

How to become a Merge Battle: Dragon Fight master?
⚔️ Display your troops on the battlefield
☠️ Merge and fight your troops to grow your powers.
⚔️ Evolve into a giant and terrifying monster.
☠️ Choose carefully the directions where you want to move. If you don't evolve fast enough, the other big creatures will crash you.
⚔️ Evolve fast, and fight all the enemies.
☠️ Be brave and face the battle like a real merge master. Become the strongest and most terrible creature that will merge and fight to conquer the battlefield in one of coolest dragon games!.

About Zenith Games:
Merge Battle 3D: Dragon fight is produced by Zenith Games. Zenith is a top publisher of Hyper Casual Games, Puzzle Games, and Casual Games. We published games like: Cartoon Crush, Lumber Master and many others. 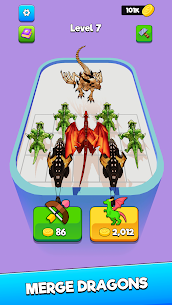