There are 10 factions and 9 classes available in the online king’s strategy game. Orcs against knights, goblins against undead and a lot others in the TBS RPG. Each faction of the «Lords of War and Money» strategy RPG game includes a set of unique creatures with unique abilities.

When playing a mobile online strategy game, you can take control of unique factions with such rpg heroes as: Amphibians, Inferno, Necropolis, Warring tribes, Sun Knights. Fight against factions like Mechanics, Pirates, Undead Pirates and others.

Just like classic heroes and magic, this rpg turn-based game allows you to turn your Hero into an almost universal soldier with the help of skills.
This entertaining pvp strategy with the elements of an RPG turn-based game was created in the best traditions of Heroes style. Castle siege, guild fight, strategy tactics, just the way we like it. Your guild of heroes awaits you in the RPG strategy game!

The strategy turn-based game is available on any device: play it on your computer, tablet, or phone whenever and wherever you want! This magic rpg strategy will always be with you.

THE BENEFITS OF THE TURN-BASED GAME:

1️⃣ Regular combat events. Join other players to raid a strong enemy or crush other people's fortresses in a legendary strategy game.
Multiplayer forms combat clans, which gain access to a special format of turn-based combats and bonuses. The Empire awards active fighters of the medieval strategy game on special events. At the same time, «introverts» can feel comfortable doing without the clan component.

2️⃣ Low entry threshold to the game. «Lords of War and Money» is pretty much a simple turn-based strategy game. You don’t have to be a top high-level player to show great results in the epic adventure rpg game.

Gold is the money and the most important resource in turn-based strategy games! You can mainly get it through guilds, events and trading.

FEATURES OF THE TURN-BASED RPG GAME «LORDS OF WAR AND MONEY»:
✅ Turn-based rpg PVP and PVE competitions.
✅ A tavern with a card game «Two Towers» like Arcomage.
✅ Combat and Peace Guilds.
✅ Duels, 2 vs 2, 3 vs 3, mixed combats.
✅ Multiple game modes: campaigns, hunt, ambush, fighting waves of enemies and storming castles.
✅ A huge bestiary – more than 500 various creatures. «Lords of War and Money» is one of the most varied online fantasy turn-based games.
✅ Schools of magic of light, darkness, nature and chaos.
✅ Strategic fantasy RPG allows you to combine thousands of artifacts that improve the performance of both the hero and the army.
✅ Fighting vehicles on the battlefield.
✅ Automatic Combat Function.

«Lords of War and Money» is perhaps the best turn-based rpg android game!
Build your castle, collect artifacts, hire an army and go on an adventure in this adventure hero rpg game!

Some bugs were fixed. Registration was simplified 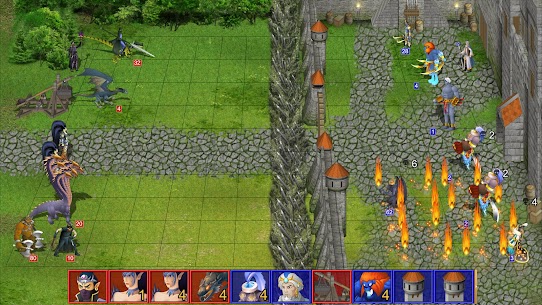