¡Discover the new features coming to LaLiga Fantasy MARCA for the 22-23 season! Sign the best players, prepare your line-ups and show who is the best soccer manager of La Liga Santander.

⭐​ NEW THIS SEASON 22-23 ⭐​
Choose a captain, recruit a manager and score from the bench while enjoying new fresh mechanics & formations

Prepare your teams each round with the best soccer club players.

Are you ready for an authentic manager experience? Have fun with tons of soccer game mechanics & enjoy LaLiga Fantasy MARCA as never before, with huge prizes waiting for you each round.

Compete against other users in El Partidazo Fantasy, with unique matches & special events like El Clásico, ElDerbi de Madrid or ElGranDerbi. By enabling this mode you will have access to a single round-Championship, in which you will be able to form your team with players from both teams involved in the event.

⚽️ NEW PREMIUM FEATURES ⚽️
Captain: Elect a captain among your players who will score double points.
Bench: Fill the bench with new players to score in case an aligned player doesn't.
Manager: You will be able to recruit managers to join your staff.
Line-ups: You will be able to enjoy new team mechanics or additional formations to the existing ones.

You will be able to sign a player from an opposing team by paying his release clause. Users in private leagues will be able to activate or deactivate it at their convenience.

Renew your team every matchday:

LaLiga Fantasy MARCA is the only official football manager game with live general ranking and scores based on official results and statistics from LaLiga Santander.

Conquer La Liga and be the best manager in Fantasy Football!

Public Leagues have divisions that you will enter based on your performance during season. If you are a new user, you will start from the last division and be able to move up based on your results.

Player scoring is based on true stats from La Liga Santander matches – follow LaLiga live while having fun with the only official La Liga fantasy manager!

What are you waiting for to create a league and play with your friends? Become a soccer manager, manage your soccer club by signing stars from Real Madrid, FC Barcelona, Atlético de Madrid… and show who is the best football manager!

1. Register in the app, get a team of 14 players and a budget of 100 million for transfers.
2. Manage your line-up, formations and tactics. Experiments with your football line-ups until you find your ideal eleven.
3. Bid for players on the exchange market and form a dream team to become the best manager ever was.
4. Invite friends and compete with them in Fantasy Leagues.

Manage your budget effectively, buy soccer legends from LaLiga and play with friends as a true manager from LaLiga.

¡Join the Fantasy family now and compete against millions of players & soccer fans from all around the world! 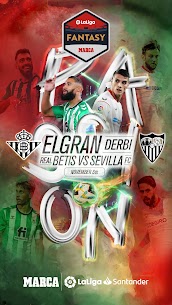 World Of Carrom :3D Board Game