While you can play the game with "Just attack with the hammer",
Increases "Battle of Battle" as you progress
Fun for beginners and advanced players.

Develop your favorite characters, make your own decks or
It is also challenging.
Become the three star hunter!

■ Relentless board battle
-Basic rules
"Place character" → "Scrape the enemy" → "Flip the enemy over and attack"
Victory when the enemy's HP is set to 0.

・You have to fight against as many players as you can
Each character has different "skills"
Depending on the "place where you place" and "the timing you use", the range of fighting increases.

By this
Only with HUNTER×HUNTER
Recreate "Smashing" using "Skills"!
Engaging, fun-filled battles

■ Join your characters and fight in your very own deck
Of course: Gon, Killua, Lerio, Krapica, Hisoka
And many more characters from the Phantom Brigade.

Of course there is fun in training and making your own decks
Especially by setting your favorite characters as'Kizna Characters'
Not only will your character reflect on the Home and Battle screens
As you progress through the Kizna level, your character skins, stamps, and more will be unlocked.

■ Experience the World of HUNTER x HUNTER
Set up your deck according to the anime settings and
Each character can bring out their power,

Use "Action Cards" that are cut and recreated from classic scenes
For example, if you activate "Steal Hunter", you will be able to steal opponent's abilities and combos.
Experience the battle that recreates the world of HUNTER x HUNTER

■ Recommended environment
Android 6.0 or later, RAM 2GB or higher
※ There are some non-recommended and non-supported devices.
※ Downloading may take some time. We recommend downloading over a Wi-Fi environment. 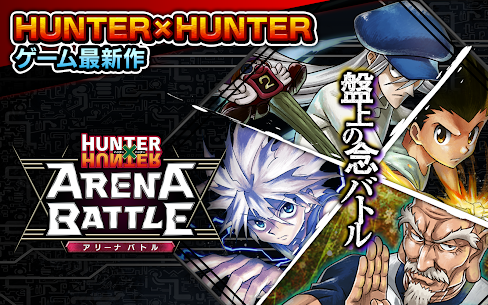