Alarm! Earth is under giant monsters’ attack. And you are the last hope of all humanity. Be ready to summon your magic hands and save the world from extinction.

??‍♂️ You can play the role of Professor Strange with powerful mystical spells
? You can shoot out spider web like the young hero Spidey Man
? Or you can practice ninja jutsu hands to fight back bad guys

? HOW TO PLAY ?
– Press hold on the screen to generate your power, aim at the monster, then release
– Quickly defeat all giant enemies before they kill the whole city
– Use special skills to boost your power when the battle gets hard
– Don’t be scared when giants come in crowd. Magic got your back! 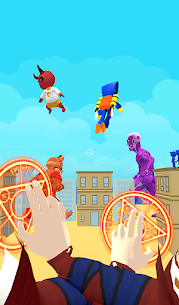