What can be better than a good old RPG puzzle game on a sunny day? Gemstone Legends – the best role playing game match-3, DUH!

Welcome to the borderless open world of the Empire full of uncharted treasuries, nerve wracking adventures, loyal allies and monstrous enemies! Spice it up with epic match-3 battles in PvP mode and limitless possibilities to level up your heroes. Still not amused? Well, tell it to the dragons of the Empire. They can’t wait to join your alliance or burn it down to ashes…The choice is yours!

Gemstone Legends is an epic fantasy puzzle game with a hint of magic of match-3 mechanics. Recruit the mightiest heroes, level up their skills and create alliances with mages, knights and valiant warriors. Choose the fraction you want to side with to fight for the Glory of the Empire!

DAZE YOUR ENEMIES WITH TACTICS

To do so you will need to collect your courage, stamina and savvy mindset. Along the way you will face numerous foes to fight, have dozens of quests to solve and a pack of dragons to tame! Use the most cunning strategies to battle in turn-based RPG match-3 combats and beat the deadliest monsters to protect your kingdom!

FIGHT TOGETHER
Challenge other alliances of legendary Heroes in real-time, turn-based puzzle battles. Build strength and learn new tactics to win these challenging match-3 battles! The more battles you win the more precious resources you get on daily missions.
Find allies and play together in a guild. Become a Dragon Rider and join forces with allies to play in a guild. Together you will earn countless treasures!
PVP ARENA
Go head-to-head with other players to show who’s the boss and earn the title of the one and only Gemstone Legend of the Empire.

Enjoy the vastness of picturesque landscapes. Choose a favourite among dozens of majestic hand-drawn characters with unique features and skills carefully animated by hand of masters.

? Open world RPG campaign maps
? Possibility to exercise your imagination
⚡ Power-ups and magical combos to fight the enemies
⛏ Level up your Heroes and upgrade their key characteristics
?‍♂️ Single-player RPG campaign with challenging quests
? Earn amazing rewards throughout the whole game!
? Unleash the dragon's fire-breath and burn your opponents!
? PVP Combat: Battle against other teams to see who’s the best in the Arena! Fight raid legends in guild wars with your team of Heroes!

Thanks to our players for their suggestions and opinions! 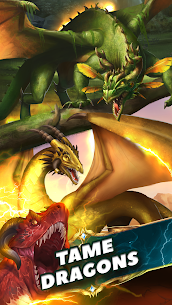