Gailardia can now be played with this application, including the sequel. However, video ad viewing is required. Sorry.

—Gailardia
If medieval and royalty RPG are your thing, then this will be a considerably enjoyable experience for you. It also includes an item completion feature and other fun elements to keep you entertained! The English version was created from the original Japanese version, so no balance changes have been made. Hence, leveling up and gold acquisition efforts may require a effort and time.

—Gailardia 2
Gailardia 2 is a tale that takes places 100 years after its prequel Gailardia. It has become clear that the three heroes in Gailardia have disappeared after the battle. (But if you haven't played Gailardia then you will still be able to understand the tale).

This time with true RPG taste, 4 people are on a journey who can each assume jobs. Adoption of a unique method for assuming high ranking jobs. Capability of changing jobs.

—Gailardia
Our story takes place a century after Gailardia 2. This latest installment wraps up the trilogy. Again a party of four heroes set out on a journey, undertaking various jobs as they do so. Special items will allow you to give all your characters Advanced Jobs and change between jobs. Gailardia 3 also allows the player to rearrange the order of party members.

The new Full Heal magic conveniently lets you restore full HP to your entire party (though not during battle). Other improvements include a greater variety of backgrounds during battle and an easier-to-read, full-screen World Map.

Gailardia can now be played with this application, including the sequel.
Targeting a newer OS.
Use of more up-to-date libraries.
Improvement of stability 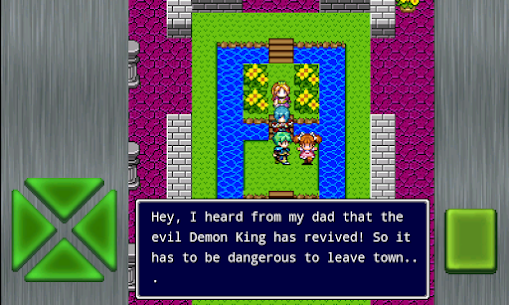