The story, the characters, the world is all original!
Familiar characters from the Final Fantasy series
Featuring "Character CG" and "Classic Pixel".
Final Fantasy Brave Exvias

The knights "Rain" and "Lasswell" from the Grand Shelter Kingdom. They grew up all the way from brothers to childhood, and were good friends and rivals.
.
One day, Rain and Lasswell find shooting meteors during a patrol mission in an airship and go to the mysterious girl “Fina” who is born in Crystal to go to the Temple of Earth. There was an army-like tougher army of the Darkness, who was trying to destroy the earth crystals in the earth.
The rainers are going to break down the crystal against his overwhelming force.
Rain and Russwell set off on a journey with Fina to protect the remaining crystals.
.
Color your adventure with unique friends you will meet in each nation.
"Ludo", a girl who dreamed of building an "flying boat" in the sky, "Nicole" who is an army officer in the water city, "Jake" who leads the rebel army in the kingdom of fire, and "Sakura", the sage who looks young but has lived for more than 700 years.
And there was another player who was born out of Finazy without memory, "Majin Fina".
.
With the power of friends, Rain and Russwell fight against Darkness and the other "Velias".
Eventually, they learn about the loves of Velias and reach the truth of Rain’s father, Regen, who hasn't been seen for years.
.
Vellas who destroys all crystals and destroys the world.
Can Rain and Russwell overcome them, defend the Crystals, and protect the world?

This is a new crystal tale――

▼ Conquer dungeons in field exploration
Touch the character to control the character and explore fields and dungeons.
Not only you can fight monsters, but also find items
Find hidden passages, discover new routes…
In this city, you will get information, purchases, and complete quests.
Preparing for the adventure is important. The best part of RPGs is here.

▼ Massive CG movies with summon beasts and characters
SQUARE ENIX’S VISUALS
High detailed CG movies from “Visual Works”.
The Summon Beasts familiar with the series are stunning quality.
Besides FFBE original character,
Even the protagonists of pre-historic Final Fantasy
One after another as CG characters! 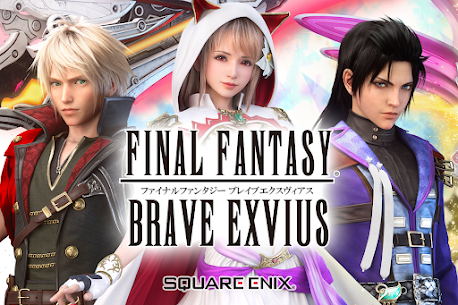