Doomsday Survival: Zombie War is a fun apocalyptic zombie world survival game. Story Background: After a terrible Resident Evil crisis broke out, the world became a wasteland. The virus turned some creatures into zombies and aliens. Familiar streets become exciting battlefields. Humanity is in danger of death and must be united. Resist the attack of zombies and aliens and save the world! Brave defenders, you have to understand, this is a tough duel, but the will of the people never goes out. You have to get as many weapons and equipment as possible to improve your combat power, in order to clear the zombies in the level faster and pass the level smoothly.

After the terrible Resident Evil broke out, the world became a wasteland, and a terrible virus turned some creatures into zombies and aliens. As the only lucky player, the player must resist the invasion of zombies. The battlefield is the cities and streets we are familiar with. Brave defender, you have to understand that this is a tough matchup. You must get as much equipment and materials as possible to improve your combat effectiveness, in order to clear the zombies in the level faster and pass the level smoothly.

This awesome zombie game has lots of brutal zombies, deadly weapons and unique heroes. Enjoy zombie slaughter in your own style. If you're looking for an amazing zombie shooter, look no further! Exciting events keep you alive in the brutal world of the zombie apocalypse. Every day can be your last so you have to use all your skills to stay alive and hunt down every dead target in the bloody action of this zombie shooting game. Don't hesitate, pull the trigger and remember – the dead don't forgive any mistakes!

This is the most exciting and fun action and zombie making shooting game. As a survivor and zombie terminator, it is your mission to survive the battle and defend the world. Get more weapons and equipment, improve combat power and combat skills, which can help you eliminate zombies faster and clear the level.

【feature】
? Enjoy zombie slaughter in many different ways
? Different lethal weapons for you to use
?Many characters with unique developmental abilities
? Different zombies and scary bosses
? Achievements and global leaderboards
? Tons of tasks
? True HD graphics

This game will definitely let you feel the thrill of shooting. Dim wastelands, dilapidated factories or abandoned streets can be full of zombies and beasts; you have to be extra careful not to touch these zombies or you will lose your life. Your first task is to survive and destroy all zombies and mutant beasts as soon as possible.

Doomsday Survival: Zombie War is an innovative offline survival shooter with one purpose: kill them! You have to survive in a city full of crazy zombies. To fend off the army of the dead, you must become a highly skilled zombie killer! Download now and enjoy this zombie game! 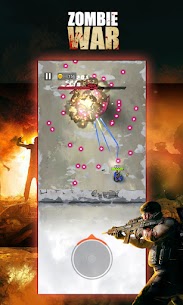