Welcome to world of Dawnblade. Raid single player and PVP dungeons, craft legendary gear sets, and save the world from its demon invasion.

– Customize your characters and gear! Dawnblade gives you unprecedented flexibility to be who you want to be in the vast fantasy world.
– Blademaster, Assassin, and Archmage: Choose from these highly iconic classes.
– Gain new abilities and clash to become the most powerful player in the PVP arena.
– Gear up with all-new set items and legendary weapons.
– Level up your favorite weapons so they can grow in power and glow with a red aura.
– Collect and train pets for battle. Each pet has special abilities that compliment your hero.
– Embark on side Quests to collect rare items and rewards.
– Play Hero Trials and defeat as many hordes of monsters as you can in 90 seconds to climb the leaderboard.

Cutting edge ARPG gaming experience delivering the best mechanics into snappy, intuitive controls on your mobile device.
– Always feel at command. Whether you’re on PVP or fighting hordes of monsters in solo.
– Directional controls & customisable joystick settings make it easy to move heroes around the world
– Activating a skill is as easy as holding a thumb down on a skill, then release to unleash hell on your foes.
– Adjustable camera settings to zoom in or out to your preference

< GAMEPLAY >
– Challenge single player dungeons that require you to think on your feet in order to survive
– Outwit bosses who use unique skills to stun, bind, block, and kill anyone in their way
– Outmaneuver enemies who possess spatial awareness, reacting according to their own strengths and weaknesses

UPDATES:
- Ads are enabled again on some select android devices
- Freebies page in the shop will also be available for those same devices
- Improved layout for daily quests for a better user experience 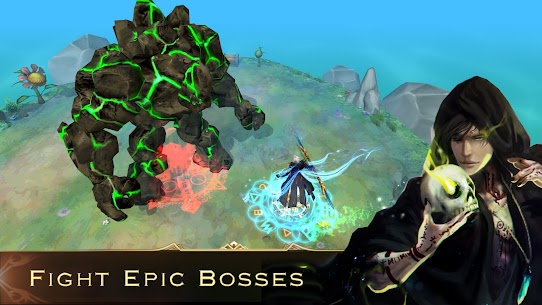