A new cooking game with a time-management chef restaurant game. ?, where cooking madness is real. Chef crazy cooking fever in cooking games! It's a love story of an underdog chef Emma. Fight her battles and win against an evil chef Drake!

Cool story, design home & play as a crazy chef in a cooking city called 'The Valley'! ?

Be a crazy cooking mama in various restaurants ?‍? in the new cooking game. It has a heartwarming story of Emma, an underdog crazy chef, beating the world’s greatest MasterChef Edger Drake. Meanwhile, she’s reviving her cooking city – 'Valley' in cooking simulation games. The game is similar to other free cooking games like Cooking Diary, Madness, and Fever but with a cool level design, a new story, a design game feature, and amazing art! ?

Henry Van Loon was a great chef. He made ‘Valley’ the culinary capital of the world.

But after his demise, Van Loon Restaurants and Valley town are not doing well. Now, it’s up to Emma! Can she restore the past glory of her family and town? Fight the food critic Ego and Masterchef Drake with the help of her friends!

Cooking Craze chefs from all over the world come here to work and learn from the world’s greatest chef Henry Van Loon. Cooking Valley is one of the top cooking games for adults from the United States, Europe, Asia & UK.

Cooking Valley has street food and fast food cooking where you can explore the cuisines and food dishes of the world and design a home ? and decorate the city without puzzles in a time-management restaurant game! ?.

? Story: Help Emma, the cooking mama, renovate her restaurants and also help her reclaim her family’s past glory.
? Design Restaurant and City Decorating: Choose your style! Cooking Valley is a suitable cooking games for girls.
? Fun ‘Boosters’ to make this time-management of new cooking games more enjoyable. Cooking valley is a good cooking game for adults.
? Exciting and Fast paced cooking games with levels. Have a cooking fever and serve recipes around the world!
? Cook and serve hundreds of regional recipes in your variety of restaurants in the Valley.
? You can design your character in your own fashion style.

Valley is a new Food cooking restaurant games for girls. Cook food, design your restaurants and cafes. And give a makeover to your character. Top rated cooking game with makeover and design game feature. Top USA themed food game.

It's a decorating games without puzzles, so just design home & city, design your character and have fun with it. Cooking game for girls and adults – and with levels.

Cooking food games for free to play but you can choose to buy character skins and boosters. So, in nutshell, it’s a free cooking games hamburger. Also, in the cooking games pizza ? and desserts ? are available for chef to cook.

In short, Cooking Valley is one of the best new cooking games in the United States with gameplay for the design and renovation of your restaurants.

As Emma Van Loon, the cooking mama, opens new restaurants, cooks delicious food with craze cooking fever and writes her own cooking diary in the city. ? 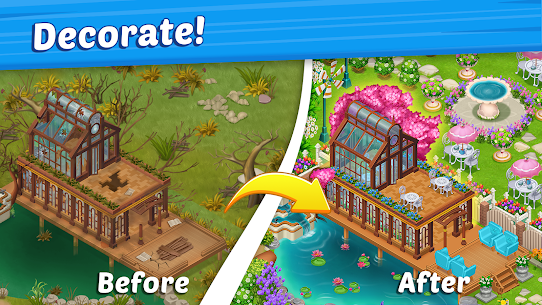