Clash with rivals in powerful cosmic spaceship battles, manage futuristic resources and build planetary facilities on countless worlds, an epic planetary colonization adventure awaits! Build your own space starship fleet command, customize it with powerful weapons, and command it either solo or with an alliance team to conquer the galaxy! Bid to become the absolute galactic imperator in this epic, sci-fi real-time strategy multiplayer saga.

STORY
The Nebula Imperium is no more – the emperor is dead. An untold number of worlds that served as the second cradle of mankind now lie in ruins. The unfathomable alien invaders -the Crux- and vile pirates are razing civilizations to the ground. In midst of the chaos, various factions forge federations to vie for supremacy, planetary colonization, and dominance. It is time for you to rewrite history and carve your throne in the stars with a powerful space starship fleet!

FEATURES
★ Revitalize your planet!
– Construct and upgrade buildings and rebuild your planet in ruins
– Recruit galactic heroes to set planetary policies, harvest resources and command your space starship fleets to victory and conquest
– Mine and trade space resources to build up your space colony and spaceships
– Vanquish space pirates and galactic criminals to gain spoils of war, either by defeating them in a quest or within the open universe


★ Crush your rivals in all-out space fleet battles!
– Battle against alien fleets, space pirates, and enemy squads
– Build legendary spaceships including cruisers, interceptors and motherships to command powerful fleets to wage war. Your space starship fleet will have to be the strongest to conquer planets!
– Join or command a galactic federation with players around the world to battle against alien spaceships and aspire to become the defender of humanity. Team up to command tactics and conquer the galaxy!
– Research weapons and technologies to strengthen your nation’s power and prestige as well as your starship fleet

★ 4X MMO space war!
– Defeat hordes of enemy forces with your allies in massive MMO clashes, team up!
– Gain state-of-the-art equipment and arms through your federation and dominate your foes
– Battle and conquer enemies to secure precious resources in a space strategy game of cosmic scale!
– Command using your nation’s strongest leaders and lead your starship fleet to MMO battle domination
– Customize your starship fleet with dozens of spaceships to suit your space war strategy

★ Form Powerful Alliances!
– Create a planetary embassy and join a galactic federation to team with other players
– Conquer the galaxy with your team of friends or with new allies
– Build a starship fleet with your allies to battle space pirates and hostile alien forces
– Coordinate strategic war against enemy planets in rally attacks with your team 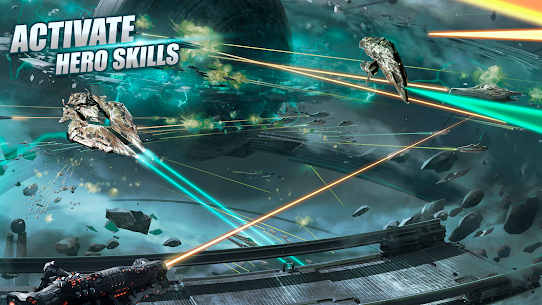