Download and have early access to be amongst the biggest sci-fi war ever to win rare tradable items!
Fight the invaders with brains and brawn in this epic action combat strategy sci-fi game. Attack enemy Arks to free enslaved citizens and enrich resources for building your defensive base. Create a Alliance & join Faction with players around the world to take on the enemy together. Scout, plan, then conquer!
– Free to Play & Play to Own
– Choose your Battle Ship! Build a squadron! Engage!
– Unlock new Commaders, Battle Ships, Special, Unit and Skills in a new & simple system ever in mobile game!
– Play with millions of other players, raid hundreds of enemy Arks for resources and fame
– Battle for control of precious resources to upgrade your Ark against invader attacks
– Join the real time co-op battle with Alliances to conquer the gigantic monsters
MAGIC FEATURES:
FREE TO PLAY, NOT PAY TO WIN
Ark Rivals is completely free to play and have fun. Our designers craft this game with a focus on fair competitive play, where you unlock features simply by playing the game.
PLAY TO OWN RARE ITEMS
NFT Ships & Commanders are always super rare & is limited so you can be always proud while you owned them.
AWESOME REWARDS: YOUR SKILL EARNS YOU VALUABLE ITEMS
In 2020, playes spent $78 Billion on in-game items and received $0. Players deserve better. Ark Rivals care about your time spending on the game, not just to have fun with others but also good return too.
COMPETE ONLINE & CHALLENGE FRIENDS
Action-packed turn-based PvP battles put your skills to the test as you ascend the ranks. Great depth and strategy for defense building game masters looking to refine their skills and duel against the best; yet easy to pick up for brand new players looking to learn a new game.
EXPERIMENT WITH DEFENSE BUILDING, CUSTOMIZE & COLLECT
Collect resources and steal loot from other players to upgrade your own base and turn it into a stronghold. Defend against enemy attacks with a multitude of Towers, Missiles, Bombs, Traps, and Walls.
FACTION WARS
Choose the side among 5 factions (Mars/ Jupiter/ Saturn/ Uranus/ Neptune) and enter the global wars to claim the top Faction Leaderboard & control the most resource of the universe.
PLEASE NOTE:
– Under our Terms of Services and Privacy Policy, Ark Rivals is allowed for download and play only for persons 13 years or over of age.
– Ark Rivals is free to download and play. However, some game items can also be purchased for real money. If you don't want to use this feature, please disable in-app purchases in your device's settings.
– A network connection is required to play.
Privacy Policy:
https://topebox.com/policy.html 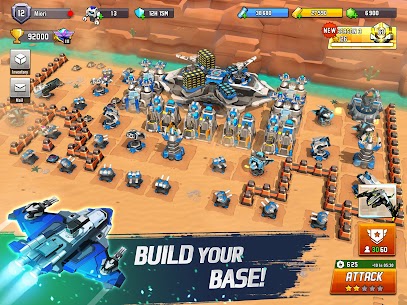