29 ( Twenty-Nine ) is a strategic trick-taking playing card game that is very popular in South Asia. The game is believed to be related to the European family of Jass card games, which originated in the Netherlands. It is one of the most popular card games in South Asian countries, especially in Bangladesh, India, Nepal, Bhutan, Sri Lanka. In Kerala, India, this game is popularly known as Allam.

Players and cards
The 29 Card(Tash) game is usually played by four players dividing two teams into Two fixed partnerships, partners facing each other. 32 cards from a standard 52-card pack are used for playing this game. There are eight cards in each of the usual playing card suits: hearts, diamonds, clubs, and spades. The cards in every suit rank from high to low: J-9-A-10-K-Q-8-7. The game aims to win tricks containing valuable cards.
The values of the cards are:
Jacks = 3 points each
Nines = 2 points each
Aces = 1 point each
Tens = 1 point each
Other cards = Rank as high to low: K>Q> 8> 7, but have no points
Deal and bidding
In the 29 Card game online, Deal and Play are anti-clockwise. Cards are distributed in two steps, four cards in every step. Based on the first four cards, players bid for the right to choose trumps. The normal bidding range is 16 to 28. The bid winner chooses a trump suit based on his or her four cards. The trump-card is not shown to the other players, who therefore will not know at first what suit is the trump.
Twenty Nine Gameplay
The player to the dealer's right leads to the first trick, other players must follow the color suit if possible. The highest card of the suit lead wins the trick, and the winner of each trick leads to the next. Players must follow suit if possible: if unable to follow, they may play a trump card or discard a card of another suit, as they like.
Scoring
When all eight tricks have been played, each side counts the card points in the tricks it has won. The bidding team needs at least as many card points as they bid to win; otherwise, they lose, adjusted for a declaration of a Pair if appropriate, they win one game point; otherwise they lose one game point. The score of the team playing against the bidder does not change.
Miscellaneous rules
The game is canceled if any of the following events occur:
If first hand for the first player who was dealt doesn’t have a point, cards can be a reshuffle
If any player is dealt 8 cards that are worth 0 points.
If any player has all the four Jack cards.
If any player has all cards of the same suit
If the person right next to the dealer has point-less cards.
Pair rule
The "King and Queen" the two cards of the trump suit in a hand is called Marriage. The pair-rule(Marriage) increases or decreases the bid value by 4 points. Pair should be shown only when the trump card has been revealed and either party takes a hand after the trump card has been shown.
Single Hand
After all the cards have been dealt, before lead to the first trick, a player with very strong cards may declare a 'single hand', undertaking to win all eight tricks, playing alone. In this case, there is no trump, the player who announced 'single hand' leads to the first trick, and the partner of the lone player places his or her hand face down and takes no part in the play. The lone player's team wins 3 game points if all eight tricks are won, and loses 3 points otherwise. 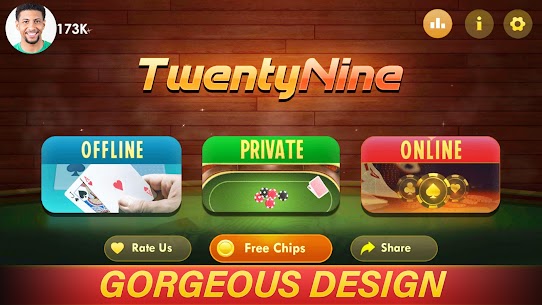