▼ Tyman between users is hot!
The basis of a single tiger is an online battle between users!
Fight in fights by making full use of various special skills! Overcome your rivals !!

▼ Infinite combinations of bike parts !!
Real old cars, dragons and monsters in the villainous system, tanks in the Sengoku style !!
Let's make your own original bike by combining a wide variety of parts !!
Even if the parts are weak at first, they will become stronger and stronger with tuning!
Remodel your favorite parts and aim for the strongest!

▼ Let's make a difference with other players with a splendid avatar!
Freely make up characters with a large number of avatar items that easily exceed 10,000 types! !!
Not only special attack clothes, but also school uniforms, sailor suits, hostess dresses, host-style suits, kimonos, costumes, and cosplay costumes!
Uniquely use an avatar that is different from others!

▼ Let's play with friends !!
You can enjoy a single tiger alone, but it will be even more fun if you have a friend to play with!
You can exchange items with friend and repair parts!
The strongest game where you can meet the best friend !!

▼ Let's cooperate with the tribe (team) and become stronger!
Two friend, three more than two, more fun with more friends !!
Join the tribe and increase your friends!
Strengthen your cohesion at the rally and create a legend with your teammates !!

▼ There is also a conflict between the tribes!
The real thrill of a single tiger is a group online battle between tribes (teams)!
Up to 1000 vs. 1000 players collide in real time !!
If you win brilliantly and raise the rank of the tribe, the range of parts you can get will expand steadily!

▼ There are various mini games!
I love gambling!
Equipped with a slot function "Tiger Slot" and "Tiger Amp" that allows you to enjoy poker like a casino!
You will get a limited reward that can only be obtained here!

▼ You can read manga in the game!
Original manga such as "Motorcycle Tiger" by the Yankee manga mogul "Juzo Tokoro" is now available!
You can enjoy the hot story!

▼ Free delivery of the legendary Yankee magazine "Champ Road"!
The bad bible "Champ Road" is being posted in the app!
We are disseminating various information such as old cars and custom cars from various perspectives!
Let's show off your favorite car in the posting corner!

▼ Caution
This app is not linked with the Mobage version, mixi version, GREE version, or d-game version.

Please use the Google wallet to purchase tiger coins. 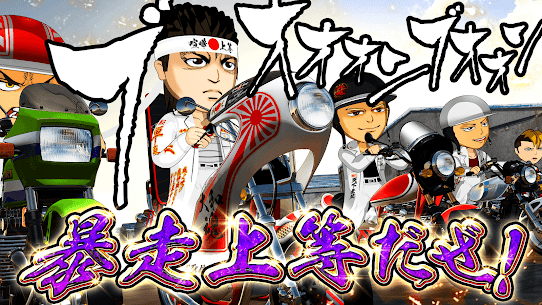