･ Cumulative circulation of 37 million! Completely reproduce the world of the popular comic "The Seven Deadly Sins" with 3D graphics!
-Full voice recording by popular voice actors of the original animation, even new voices!
-Enjoy cinematic production and strategic battles that you can enjoy 200% without knowing animation!
･ Newly written music of the game original by Keiichi Okabe, a famous music producer in the series.

▼ Thorough reproduction of the original world view
Completely reproduce the continent of Britannia in high quality 3D! The holy war that ended 3000 years ago begins again!
The original story reproduced with cinematic 3D graphics!
Newly recorded voice by the original anime voice actors!
Let's challenge the holy war with the characters of "The Seven Deadly Sins"!

▼ Skill-based battle system
A new concept strategic battle using skills!
By arranging the same skills, you can rank up to powerful skills!
Strategically assemble the order of skill activation, movement, etc., and defeat the opponent at once with a special move!

Let's start your own Britannia adventure.

-Compatible specifications: Android 4.4 or later, Ram 3GB
* Even if the compatible device conditions are met, it may not work properly depending on the device status and the installed application status.

Check out the latest information and campaigns for "The Seven Great Sins: The Battle of Light and Darkness: Gracro"!

* This game is basically free to play, but some paid items are available. 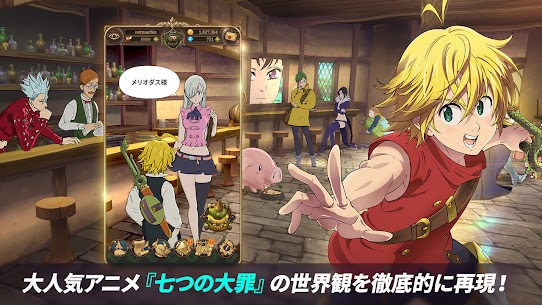