The first smartphone game in the Code Gears series.
Gears RPG game with a new story of revenge.

In January 2019, the mysterious Masked Man zero
The Zero Requiem was achieved by defeating Ludo, the Emperor of the Holy Britania Empire.

However, on the other side of that peace, the spiritual world, “The World of C”, which was the root of Gears,
One person can bend the mind,
Protected by one human,
One human collapsed that rule,
With its original functioning lost, the world stops.

The story is about a boy who has no memory.
You start where you wake up in the stopped world, Winter of Finble.
He met a mysterious girl Gigi and learned that he was an observer with Gears of Phase Shift.
In order to restore the world, Al will observe various stories through time, time and space and time.

He eventually solves the mystery of truth and gears hidden in himself.

Along with Gears in the previous series, the first Gears have also appeared!
Don’t forget to check out the powerful special write down special cut in.
Fascinating SD characters will battle it out in a row or column against the enemy.

Characters are specially designed for nightmare battles.
Use your organized army to lead your battles to victory on a vast map.
All this, you will test your strategy and strategy at the core of Code Gears.

Space with temples, ruins, news stations and all facilities.
Unlock facilities, level up and increase your stats.
Build it aggressively and get the advantage of various battles.

Unlock new illustrations and original voices unique to our game.
Characters from pre-historic series and original characters,
Improve your character and bring them to each battle.

Recommended and supported OS: Android 7.0 or later
Recommended and supported RAM: Smartphones and tablets with 3.0GB or more
※ Some models may not run even with the recommended version or higher.
※ There is a possibility that future devices may not work.
※ Devices with less than 3.0 GB RAM will be unable to play.
※ Even if your device is specified as the recommended environment for pre-registering, it may not be possible to support all of them.
(Even models that have been pre-registered may not be supported) 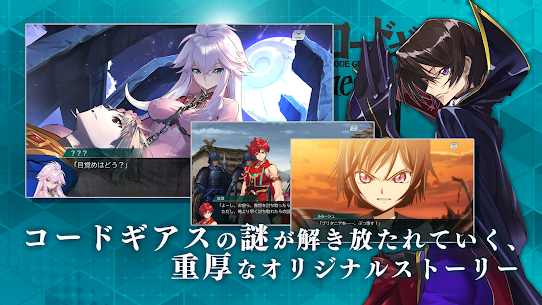